With a debt of $353 million, Yubari City in Hokkaido, Japan, went bankrupt in 2007. Their mission was to promote Yubari, reenergize its citizens, and help make the city economically viable once more. They focused on the fact that Yubari boasted the lowest divorce rate in the whole of Japan and created the idea, "Yubari, no money but love". In expanding this idea they created a loveable, yet slightly ironic character called "Yubari Fusai" - “Fusai” means both “debt” and “married couple” in Japanese. They then collaborated with the City to create additional schemes that positioned the city as a destination for happy couples – official certificates of happily married couples, branded merchandise and Yubari music CD’s, to name but a few. $1.5 million was generated in advertising value with exposure including 100 newspaper mentions, 100 online media mentions, 30 TV mentions and 53,100 blog entries (source: Google search). -Since the initiation of this project, annual number of visitors to Yubari increased 10% year on year, whilst $31 million has been generated toward alleviating the city's debt. - Branded Yubari Fusai products that initially were only available in Yubari now enjoy popularity nationwide. Given the state of the city’s finances the idea had to be low cost but highly effective. Just as importantly, their promotion had to be upbeat and positive. They needed to protect the sensitivities of the local residents and be sure that the promotion didn’t demean them in any way. The idea of “no money but love” was an honest, yet endearing articulation of the situation they faced. Added to which, and in a country obsessed by cute characters such as Hello Kitty, the Yubari Fusai icon, proved to be a potent vehicle in generating WOM, print and broadcast PR. Grand Prix Cannes Lions Promo Winner. 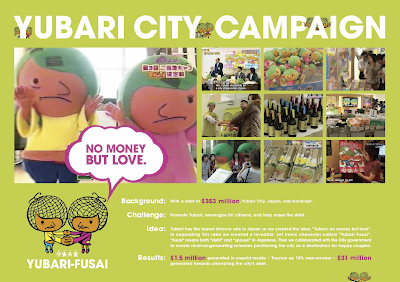 Posted by Marc van Wageningen at 10:44 AM