In the unifying spirit of the Beijing Olympics, Nike wanted to create a historic event that would bring the entire world together, inspiring its active community of avid runners as well as inviting new runners to the sport. To do so, Nike developed something that was appealing to both audiences—something that current runners would find challenging and engaging but which would be approachable enough for new runners. The Nike+ platform connected runners worldwide and made the Nike+ Human Race 10K a reality. The Nike+ Human Race 10K was the largest one-day running event in history, and the next evolution of the award-winning product, Nike+. Runners around the globe came together, both physically and virtually, to challenge and inspire each other. As Nike’s lead digital agency, they connected people to the race in the digital space and beyond. They created a digital platform which included registration, race and concert information. They developed tools to let users find and challenge other runners; utilities that helped people raise money for charity; media players with access to proprietary music mixes; video content featuring athletes and artists, housed on its own YouTube channel. And on race day, they made results available as they came in. Working with partner agencies, they also created concepts for on-site experiences like video booths and off-line ideas such as a commemorative book in which users could submit photos of their experience. Silver Cannes Lions Media Winner. 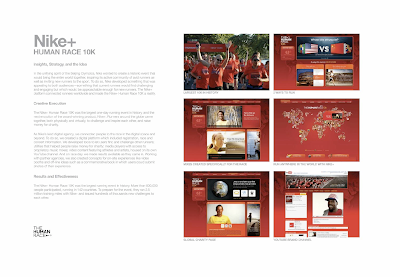 Posted by Marc van Wageningen at 11:08 AM