Gothenburg Homeless Aid is a charity organisation that helps the homeless, substance abusers and other vulnerable people. Most of us are a bit more generous around Christmas and tend to give more to those less fortunate than ourselves. That’s why Christmas is a very important time for the Gothenburg Homeless Aid, and a large proportion of the entire year’s funding is collected. This is why, every Christmas, Gothenburg Homeless Aid sends letters to everyone who has previously donated money. To illustrate just how tough even a single night in the streets can be, they let the envelope spend a night outside, so when the envelope reached the recipient it was rather scuffed. A few hours in the rain without shelter will do that to you, man or envelope. While it’s hard enough to get people's attention with direct mail – it’s even harder around Christmas. How can they make a regular letter stand out in the avalanche of Christmas cards, advertisements and junk post? And how can they make the envelope itself become the carrier of their message? Well, before they posted it, they let it spend a night in the streets. The letter was sent to 1,500 households in Gothenburg (taking into account their age and annual income) just before and after Christmas. In total, 22% of the recipients donated an average of just over 29 Euros (to be compared to last year's results when 15% of the recipients donated an average of 21 Euros). The Christmas campaign as a whole raised 163,000 Euros - an all time high. Not bad for a city with scarcely half a million people. The campaign was the most successful ever for Gothenburg Homeless Aid. Bronze Cannes Lions Direct Winner. 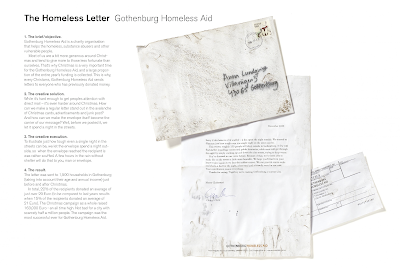