In the third year of Earth Hour, it was time to turn the symbol of switching off the lights into real action against global warming. In December 2009, world leaders will meet in Copenhagen to determine if policies are made to take action against global warming. They targeted this meeting as a critical opportunity for people of the world to make their voice heard. To unite the world to take action, they transformed the light switch into a vote, and held an election between Earth and Global Warming. They asked the world to VOTE EARTH by switching off their lights for Earth Hour, with the goal of presenting the votes to world leaders in Copenhagen. Over 4000 cities in 88 countries voted by switching off their lights. This transformed the world’s lights into a medium, to create a global mandate for change. Gold Cannes Lions Outdoor Winner. 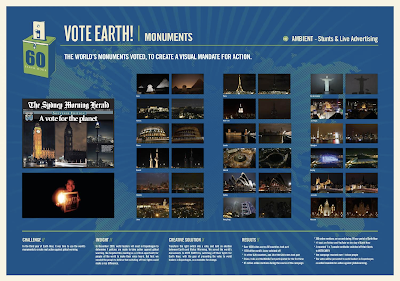