More than 200 banners were made with a range that reached the national spectrum receiving a lot of free press. In the ranking of most admired companies compiled in 2008, La Sirena rose with a 50.9%. Another study showed the buying preference and it’s rise to 42.5% and a closing year with a SOV of 76%. A superimposed banner that reacted through funny messages within the context of the actions and the article that was being promoted. Using a unique media negotiation with the channels that broadcasted the 5 top rated soap operas they were able to insert a breakthrough way of announcing the week’s offers: a superimposed banner. A week prior to the air date all the soap opera’s episodes were evaluated and studied, looking for articles that looked like the ones in the offer for the upcoming week. During the broadcast, at any given moment the banners reacted through funny messages within the context of the actions and the article that was being promoted. The objective was to communicate the weekly specials through TV in the midst of a financial crisis that had commerce maximizing their budgets while cutting down on expenses. This stirred a retail advertising war that ended up creating a huge amount of bumper commercials that were boring and monotonous. The target audience was housewives, stay-home mothers and any other character that had the power to choose which household items were getting purchased. They knew they had to find a more entertaining and interesting way of communicating the products in a more relevant way. The client advertised the articles in its inventory and the target audience got the information with an emotional twist. While some overlays were completely rational others had a hint of humor that stuck with the target audience in a moment of complete attention. Gold Cannes Lions Media Winner. 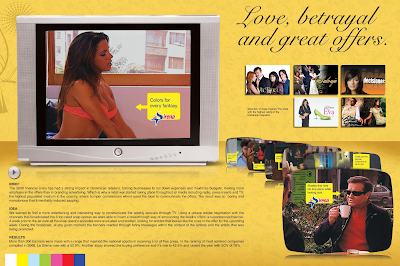 Posted by Marc van Wageningen at 9:43 AM