Oxford Fajar "Save the words"

The Oxford English Dictionary is updated every year. However sales are lagging due to the influence of the internet and online dictionaries. To stop the decline and stimulate sales, their task was to find a way to engage consumers and make the dictionary relevant again. In short, they had to make people fall in love with the joy of using the English language. The strategy was to centre the campaign on the internet - the largest cause of the dictionary's decline. They created a hub where people could discover words and interact with them in unusual and humourous ways. By using words that were archaic but mysterious, they built up a "fan-site" for words that allowed visitors to use them, share them, wear them and shop for them. This ultimately led them to purchase a dictionary. After almost a year of painstaking research, writing and re-writing, the promotion was launched via the web followed by executions in print, poster, ambient and public relations. From Singapore and Malaysia to the USA and the UK, the promotion has found fans all over the world. SaveTheWords.Org was featured extensively on talkback radio shows, on online TV shows such as CNET TV, on twitter.com, on major blogs such as lifehacker.com and even on HillaryClinton.com. To date, they have 13,839 registered adopters, over 22,000 monthly page views, and over 3 million website mentions. Ardent fans have been blogging and twittering their newfound words, and there’s even a fan website of photographs inspired by savethewords.org. Most important of all, sales of the Oxford dictionary have increased by 12.6% and they have cultivated a newfound passion for the English language and the Oxford dictionary at the very place that threatened it's existence. As the internet is the major source of the decline in dictionary purchases, it was the ideal place to begin a promotion to address this decline. Lovers of words are naturally readers of websites, blogs and online newspapers. And word lovers enjoy being able to interact with words, test their knowledge and share that experience with others - this promotion allowed all of that to occur. Silver Cannes Lions Promo Winner. 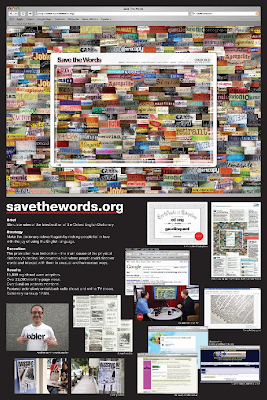