The Green Party "The Coral Cemetery"

The Red Sea Coral Reef is being killed at an alarming rate – 70% is dead. The Green Party wanted to make the general public, especially reef tourists, aware of the alarming rate of destruction and the urgency of conservation. Their insight is that many people fail to believe that so much of the coral is dead. Their strategy was to communicate to people at the actual time and place where the coral had died in order to create awareness of the destruction and their role in its fate. They created an environmental installation of a “coral cemetery” consisting of 75 floating graves on the site of the Northern Red Sea beach. The graves carried the names of coral reefs that had died. The installation was created during the heavy tourist season targeting the short-term tourists who create the damage. By sign-posting the places where the coral had died we influenced reef visitors to take action and protect the areas where the coral was still living. The story also reached the wider public and was featured on national cable and terrestrial TV news (HOT, Channel 1) and the local press. By gaining extensive “free” media coverage, they succeeded in amplifying their message and putting the Reef’s fate back on the nation’s agenda. Bronze Cannes Lions Media Winner. 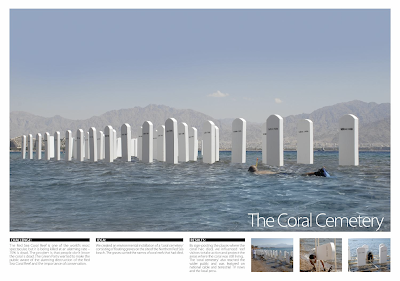