Cleaning products were getting a bad ecological rap, and as the inventor and manufacturer of bleach, Clorox was taking the brunt of it. In spite of that fact, Clorox planned to enter these treacherous waters with one of their most important product launches: an eco-friendly, plant-based cleaner called Green Works. In order to succeed, they would have to reach ecologically-minded thought leaders, the very people leading the charge against toxic cleaners. At the same time, they would need to demonstrate to their current customers that a green cleaner could be just as effective as a traditional cleaner. Both groups needed to see proof. Their idea was to create a larger than life product demo that proved this new product was worthy of its name sake. An event that would show the world that Green Works is green and that it works. They enticed Paul “Moose” Curtis, pioneer of an art form called “clean tagging” to help realize their vision. Green Works are 99% plant-based, so they had the idea to reverse out a mural of plants and trees. They chose a high-traffic, incredibly dirty location - the entrance to San Francisco's Broadway Tunnel. The 140-foot wall became the canvas for a live Green Works billboard. The event was covered by local news channels and received press coverage the following day. They commissioned award-winning documentarian Doug Pray to shoot a short film profiling Moose’s artistic philosophy and the creation of the mural. They developed a dedicated website (reversegraffitiproject.com) to house the documentary and provide people with more information about the event and give them the behind the scenes story. They gave the documentary its debuton You Tube for maximum exposure and seeded it in popular social and environmental blogs. Images of the mural were posted on over 230 blogs around the world. In less than one week the film became YouTube’s #1 Featured Video and received over 500,000 views. With $55,000 USD and one dirty wall they reached millions of people and received media value of $2.1 million resulting in 7.5 million media impressions. They turned negative conversations into influential ones driving a negative tone down to a mere 5% in blog postings. Within 6 months, Green Works was #1 in the natural cleaning category. Over one year later, the mural is still visible and 20,000+ people view it daily. Gold Cannes Lions Media Winner. 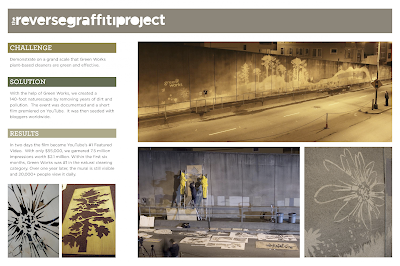