myToys.de is one of Germany’s largest online toy stores. The task was to advertise LEGO, one of the company’s leading products, with an innovative campaign. Many people should be guided to the website where LEGO brick boxes are sold. The target audience was drawn from potential new customers. MyToys.de is an online toys retailer. On one hand, they had to lead people to the website, and on the other hand they wanted to amaze and involve them in the offline world at highly frequented places in German cities. By using the colourful and stunning patterns of real LEGO, they caught the consumer's attention. And, because these patterns were QR Codes, they were able to guide them to the website where they could buy a LEGO brick box. Therefore, each decoded message included a web-link, with which the corresponding LEGO brick box could be ordered directly from myToys.de. They created an interactive direct campaign that was as playful as LEGO itself. Therefore they utilized QR Codes, which are increasingly popular in Germany. They are able to encrypt all kinds of information, including web-links. Three-dimensional and colourful QR Codes were built by hand - using real LEGO bricks! Curious passers-by could crack a LEGO Code, simply by taking a picture with the QR Reader of their cell phone. The decoded message suggested one of many imaginative possibilities that could be built with the LEGO bricks used in the code that people were standing in front of! The LEGO codes were linked to success. Online tracking showed, that 49% of all online visitors at the LEGO Sites from myToys were achieved through their campaign. And compared to the non-advertised LEGO products from myToys, the LEGO brick boxes were sold twice as much! Their campaign aroused people’s playfulness and opened their minds to the imaginative world of LEGO. 3x Bronze Cannes Lions Direct Winner & Bronze Cannes Lions Promo Winner. 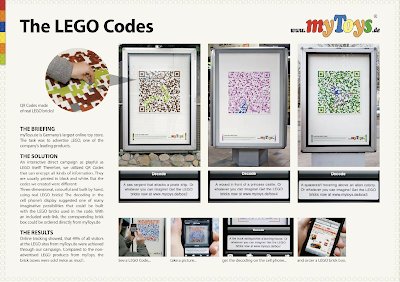 Posted by Marc van Wageningen at 9:25 AM