Teens are fundamentally important to Fanta. Mobile phones are vitally important to teens. Fanta wanted to look at the mobile platform in its broadest sense and create something that not only championed the core brand values of ‘PLAY’, but also gave teens something they need. Teens are never separated from their friends or their mobiles; they’re in a state of constant communication. They want to talk freely, without adults listening in. It’s a little known fact that teens can hear higher pitch frequencies than adults. In some parts of the UK these frequencies are used against them as ultrasonic alarms, to deter them from public spaces. In a playfully subversive way, Fanta flipped this technology on its head; creating a mobile application which gives teens an imaginative new language of secret sounds, that adults can’t hear. Fanta Stealth Sound System - a mobile application that utilises high frequency sounds to allow teens to communicate without adults listening in. The application lives on a Fanta branded wap site. On-pack labelling and a viral film were created to drive teens to the wap site and download the application. In-store radio was also used to drive teens to purchase Fanta and engage with the on-pack messaging. The radio advert was the world’s first ‘silent’ ad – making perfect sense to teens and baffling adults by using the same high-pitched sounds to finish off sentences. The ads played out in shopping malls – the same place the noises were first used to deter loitering teens. “It helped them become part of a community and the community are teenagers, so it’s brilliant. It’s the perfect tool to represent what Fanta stands for – to overcome adulthood and boredom and give their core target group a way to communicate with each other without the rest of the world knowing. So, how cool is that?” -Prinz M. Pinkakatt, Group Interactive Marketing Manager, Coca Cola Europe. The wap site had 75,000 hits in the first week. Directions to the wap site and application feature on over 50 million cans. The viral has already had 600,000 views. (These figures will be updated on 1st may 2009). Silver Cannes Lions Media Winner. 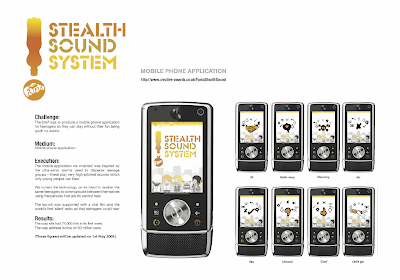 Posted by Marc van Wageningen at 11:13 AM