Objective: Drive trial and top of mind awareness among advertising creatives and production houses and make Supersonic Sound the most talked about sound studio in the advertising community. As a highly specialized sound production company, Supersonic has a very specific and demanding target group. The choice to create an online sound comic series was driven by two factors: the level of involvement among the core target, and the ability of Supersonic to display their capabilities to a wider audience via the viral effect. The country's top creatives were invited to participate, 97% said yes. This 97% were actively working with Supersonic during the production of each episode. Ultimately, their involment created an estimated 95% penetration in the industry as they were ambassadors for the project as it was spread online. The initial promotion mail-out and website created a 97% response rate among the core target who had a uniquely high involvement in the promotion as they actually worked one on one with Supersonic on the episodes. Ultimately, their involvement and ambassador effect in their respective agencies combined with the promotion website resulted in an estimated 95% penetration among the wider target group. Supersonic has picked up new business directly related to the promotion and claimed 100% of the radio shortlist at the country’s Creative Circle Awards this year. The creative concept allowed Supersonic to demonstrate every aspect of advanced sound production - from song writing, charaterisation, storytelling, SFX to voice overs as these were all naturally included in the execution of the concept. Furthermore, the episodes were written by top creatives who not only had the chance to prove their own creative skills to the rest of the industry, but also put Supersonic to the test on any or all of the parametres above in front of the whole target group on the Supersonic comic book website. Bronze Cannes Lions Promo Winner. 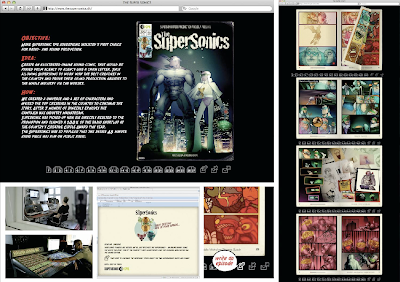