They needed to regain the leadership that the Taxi 7:24 Chevrolet was losing a year ago on the market. The target are colombian taxi drivers who had begun to lose confidence in their brand and in their taxi 7:24 Chevrolet. If a taxi driver transports and talks with so many passengers daily, they should have lots of good stories to tell. They found a natural way to bring the brand to the target and make them feel fully identified with the communication. The creative strategic solution was to convert the target into the main character of the campaign. Because of the target profile, radio became their principal media, however, media such as outdoor, ambient, print and TV allowed them to strengthen different moments of the campaign. The taxi drivers were so identified with the brand, that they looked at it again as a closer brand which generate's their trust. The perception of the taxi 7:24 improved so much with the campaign, that they achieved a 25% increase in sales. By December 2008, at the closure of the campaign, the monthly sales reached 52% more units than when they launched “Taxi Rockola”, and nearby competitors reduced theirs by 18% in the same period. They went from selling 289 units, to currently selling 403 units, for a total closure of the campaign with 2015 units sold. Bronze Cannes Lions Media Winner. 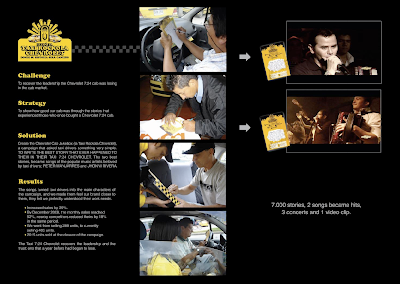 Posted by Marc van Wageningen at 11:43 AM