They had a challenge. To launch Pampero rum in Portugal, a place where rum is for old and boring people. They needed to make Pampero cool. For this purpose, they focused on the social group who refer to themselves as INDIE. Why them? because they are opinion leaders and trendsetters. They say what is cool and what’s not. So, if they say Pampero is cool, everybody will follow them. The job is done. Traditional advertising just doesn´t get to these people, art does. Using Pampero Fundación, a foundation that supports alternative artists, they created the world´s first Ephemeral Museum. First, the best pieces of street art at the Bairro Alto district were tagged. Then they created a MUSEUEFEMERO.COM where you can download an audio-guide and a map with the pieces location. So you can go out with your mp3 player and walk the museum streets. The Ephemeral Museum was communicated in magazines, online, posters, and happenings in bars presenting different artist painting live in Bairro Alto. With an annual budget of only €30.000 they generated visibility of more than €240.000. According to Millward Brown in a few months Pampero reached the sales expectation for the whole year, they doubled trials and tripled people's awareness. Pampero matched his competitor in sales and in awareness. Remarkable considering that the competitors have been in the market for 15 years. Quickly they had way more visitors than any museum around. Hundreds of articles around the globe talked about it. Including several tourist guides. The brand is working to open new galleries in Italy, Spain, France and UK. The Ephemeral Museum quickly became relevant for the target, and so did Pampero. This promotion made the brand closer to the target, nowadays, Pampero is considered as a brand with an artistic stance that talks in their language. The site MUSEUEFEMERO.COM is constantly updated and soon became a cult place where artist and people interested in street art share opinions, information and fresh pieces of art. Bronze Cannes Lions Promo Winner. 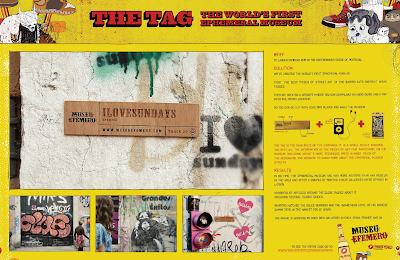