Pies face the pressure of healthy eating. After having a long history of success as the unpretentious, honest and satisfying lunch for guys, Four’N Twenty, the iconic Australian meat pie brand was beginning to struggle for something to ignite existing and new customer interest. It now suffered from being considered an unhealthy meal choice. Sure guys still loved Four’N Twenty pies, but often they couldn’t commit themselves to eating one because of constant pressure by society to now be more responsible with their diets. All this pressure also frustrated them. They had to find a new way to give them permission to enjoy the pies. Pie eaters feel free to eat pies again. Building on Four’N Twenty’s history of being an unpretentious Australian brand, the Magic Salad Plate made light of health pressure, showing they understood their customer’s frustrations. It was a true innovation in the category, entertaining but also challenging social trends that celebrate the notion of the “health nut”. The plate price covered all manufacturing costs and it worked with a double impact, first encouraging people to buy pies initially to get their plate, then driving people to buy more pies to use it. Soon they were at workplaces around the country, generating publicity - driving more customers to buy more pies. The Four’N Twenty Magic Salad Plate. Instead of denying Four’N Twenty’s lack of health, they embraced it. They created a solution that worked with the pie to humorously say, “For five minutes society, can you bugger off and let me eat what I want!” – The Four’N Twenty Magic Salad Plate. An innovation that lets pie-eaters ridiculously appear to be also having some salad, when in truth it’s just part of the plate. Advertised across many mediums customers were driven online to buy plates using unique codes collected from packs. The goal being to lift Four’N Twenty single serve pie sales by 10%. Pies and Plates sell like crazy. The most successful marketing campaign by Four’N Twenty ever. The brand was immediately rewarded with huge free publicity for being “true to itself”. The brand and the plate became a symbol for letting guys just enjoy food. In the first fortnight, plate sales were reported at 25,000 and it was recently voted one of the best new products of 2008. It even appeared on eBay for 15 times its original value. Most importantly, Four’N Twenty pie sales soared with a 40% increase in single serves and 21% in four packs. Bronze Cannes Lions Direct Winner & 2x Gold Cannes Lions Promo Winner. 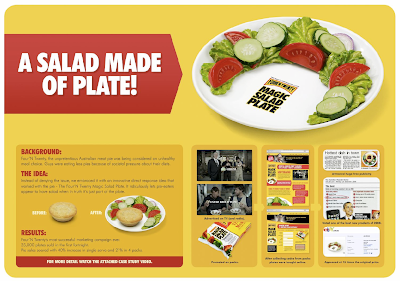 Posted by Marc van Wageningen at 10:17 AM