Discount Bank, declared itself as becoming a "Green Bank", as a part of the process they were asked to create an internal campaign addressed to the employees. But, to differentiate itself from a "usual" campaign which in many cases is immediately forgotten once it gets off the air, the mission was to educate the employees to permanent environmental awareness which will last and eventually create a real difference in their consciousness beyond their work hours. A simple sticker in the size of a light switch on its upper side is written the word: "ON", lower- "Off" and in the middle- "GLOBAL WARMING". You paste the sticker on the light switch and... that's about it! Within just one day, "Discount Bank" tower became a green tower. Every single employee is exposed daily to the strong connection between electricity consumption and global warming and can, with his small finger, contribute to the global effort. 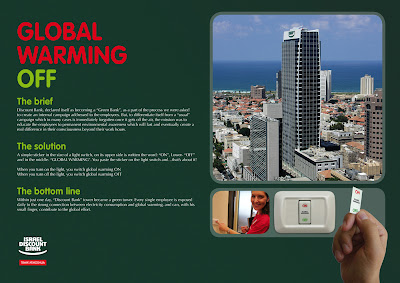