The idea was to take advantage of the worldwide heavy media news coverage on A-Flu in order to generate sympathy among people through a simple action in face of the social paranoia it produced. Within the context of this extremely contagious illness through direct respiratory system a Cell Phone Company proposed that in some crowded confined places it was better not to speak and that the best way of communication was trough SMS. In consequence, the campaign used one of the typical A-Flu objects shown by the media during this outbreak. At the entrance of the downtown subways in Buenos Aires, face masks with a message printed were distributed among passengers that would use them in their trips inside the subway. 1- "These days is better to use SMS" 2- "You'd rather use SMS" 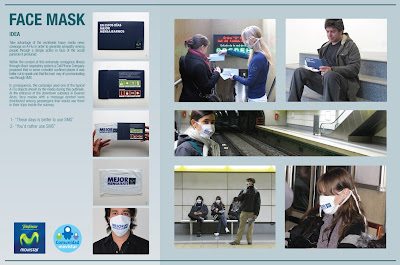 Posted by Marc van Wageningen at 9:52 AM