Oxygen Network "Dance Your A** Off"

Oxygen Network, along with Dom Camera and Company, partnered with Monster Media to create a cutting edge ad campaign promoting the premiere of their new reality show, "Dance Your A** Off". This technologically infused storefront domination campaign stopped thousands of pedestrians in their tracks at its highly trafficked location just steps away from Macy's in NYC. The (9) LCD linked high definition display featured dance clips from the new show that were triggered by the body movements of passers-by. Keeping with Oxygen's "Live Out Loud" theme, users not only triggered the interactive display but also activated an audio aspect, complete with the show's theme song and a voiceover from the show's host, Marissa Jaret Winokur. Oxygen's customized Monster Storefront was an automatic attention grabber. The campaign not only increased viewer awareness of the show's premiere, but also lead to "Dance Your A** Off" setting a network record when it debuted to an average of 1.3 million total viewers. That's the largest audience ever for an Oxygen series premiere! 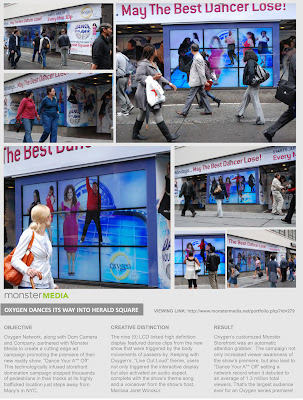