In Bucharest, the majority of the drunk drivers are men. Most of them drive under the influence after drinking alcohol in pubs, bars or clubs. The main dilemma was how to get these guys with a very low budget. Because it's nearly impossible to drink while out without going to the toilet, the urinals in the men's bathroom were transformed in an active reminder of the reduced ability to drive when being drunk. The stickers are placed in the most crowded bars in the center of Bucharest, with a total estimated clients of 2000/day. 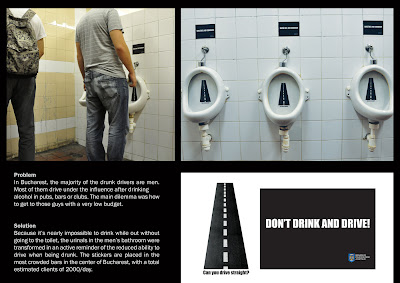