Directski asked them to create an ambient campaign to promote their winter ski holidays reaching their target merket in an untraditional way. They developed a windscreen flyer and targeted the carparks of dry ski slopes and holidays expos. They also targeted urban streets near adventure sports and ski shops. They placed theses flyers on the windscreens for a week at the start of the winter. In the morning the frosted/snowed upon windscreens would become like ski slopes. In approaching the vehicle, the image of the skier, wich was die cut and bent at an angle, would appear to be skiing down the windscreen. Encouraging the person to engage with it by picking it up to investigate. 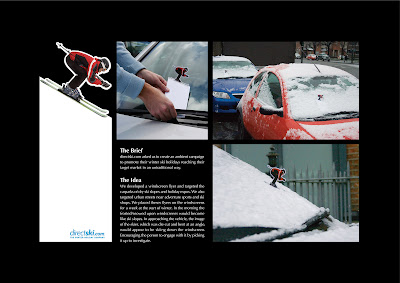 Posted by Marc van Wageningen at 11:44 AM