Every year, 2,450,000 people become victims of human trafficking, of whom 92% end up being used for sex. 98% of the victims used by the sex industry are woman and children! (source OIT,2006) Following on from a press and poster campaign, real meat trays were placed in the butchery sections of supermarkets, in amongst cuts of meat. At the point of purchase, consumers were directly faced with the fact that prostitutes are the victims of the trade in human flesh. 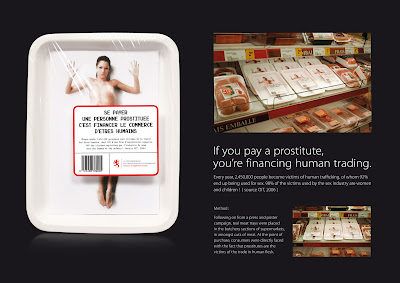