Because Prius vehicles are brought into the country in very limited numbers, Toyota felt it was implausible to promote the new generation Prius in mass media. They were therefore asked to target a very specific group of people who already own the previous generation Prius. They decided this would be best achieved through the use of a hand couriered direct mailer. The new generation Prius has a very unique feature called intelligent park assist. The system allows the car to quite literally park itself, without any human intervention. In short, when it comes to parking, the car is in the driving seat. To promote this revolutionary feature, they produced driving licence's that were issued to the new Prius, and sent them to the existing Toyota database of Prius owners. Altough the next generation Prius is only arriving on their shores towards the latter part of the year, the majority of current Prius owners who received the licence cards have already placed their names on the test drive register for the new Prius. 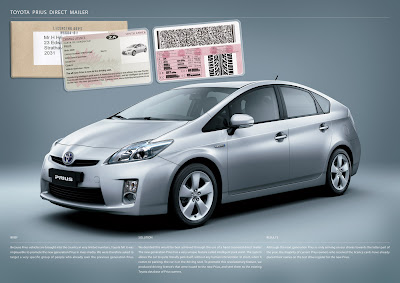