The challenge was to promote the new Golden Bowling among Tunesian youth. With hardly any budget. As they couldn't afford standard advertising and had to target Tunesian youth, they chose querilla marketing with a bit of provocation. They decided to convert a very noble ad serious institution, la Cité des Sciences into an ambassador for their bowling brand. La Cité des Sciences is placed in a student area and is situated near a motorway, thus receiving 500.000 eye contacts a day. They scotch-printed 3 holes on the globe so that the viewers could see a bowling ball. A logo of the brand and the adress were added. The activation is still recent but 2 TV channels & 5 newspapers have initiated a debate about advertising on public sites. Whatever the debate, it contributes to building the awareness of the Golden Bowling. 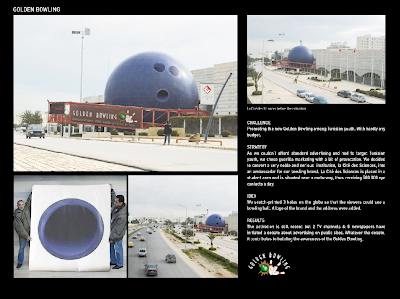 Posted by Marc van Wageningen at 9:44 AM