In april 2009 the new Lancia Delta with a green but extreme powerful 1.8 litre Biturbo 200HP engine will be launched. Communicate this in a non-conventional way with just as much power, for the stylish brand Lancia. Experience the extreme power of the new Lancia Delta 200HP by physically showing more than 200 horses. For about an hour 200 horses showed up in the city of Amsterdam as a huge cavalry. All the horses were Lancia branded. Three Lancia Deltas were hidden in the cavalry and revealed on the Rai Square. This is were the biggest car event in The Netherlands attracts many car enthusiasts every year. 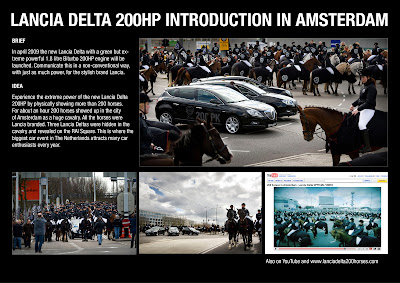 Posted by Marc van Wageningen at 9:57 AM