To raise awareness on gender inequality in the Lebanese society. Several words in Arabic are written and said in the masculine format until a “kasra” accent is used under them to address the women too. A call for action also asks women to make it a habit to use the “kasra” to bring about gender equality. Using a “kasra” accent on words is a way to address them to women. To reach the country geographically and all women demographically, a moving interactive billboard as well as posters were set up, displaying words without an accent. Stickers were distributed, in rural and upscale areas, to engage the public and physically get them involved. TheyLebanon wanted to get people to literally take the “kasra” accent, place it under the big word, and “take the habit of getting things moving”. Wherever the big word and empty “kasra “was transported, it received an excited gathering. People would step up to physically change the word by adding their “kasra”, and contributing side by side to the bigger picture. As for the posters, none were left without a filled in “kasra”, whether with a sticker or by other creative means. The meaning behind literally changing the word empowered them to actually change their reality with their own hands. 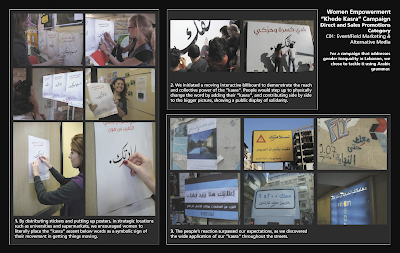