Switch is MTV Networks International's Global Climate Change Campaign. They are always looking for ways to get people involved in the global warming issue and drive them to the the MTV Switch website, without necessarily using expensive media. To make people aware of the rising sea level because of global warming, they confronted them in an amusing way with a serious message using a floating board in the Amsterdam canals. This board seemed to be held by a submerged man with just his hands sticking out of the water. In reality it was two arms mounted on a small remote control submarine. The copy said: Global Warming. What's all the fuss about? Find out for yourself www.mtvswitch.org. Because of the massive positive feedback. MTV is not only looking to extend the promotion to other Dutch cities, but also to air it on TV. 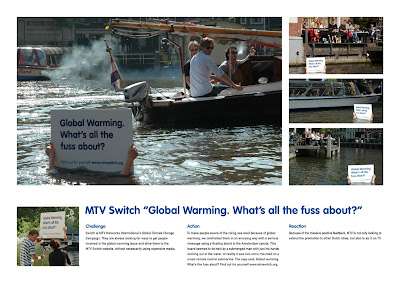