Promote the new shower gel Nivea Lemongrass & Oil, wich both refreshes and nourishes, to woman who are active in sports. With 13,000 participants, the Woman's Run in Switserland is by far the largest woman's sporting event in Europe. During this race, they positioned theirselves with detour signs just before different curves in the route, so as to give the runners and spectators the impression that thousands of sportswomen were running for the Nivea shower gel. A highly effective increase in publicity and a lot of sympathy gained from the target audience in just one only day. Nivea by far exceeded the sales targets for the first month. 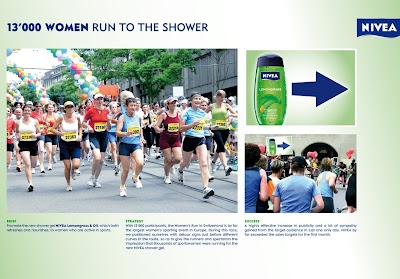 Posted by Marc van Wageningen at 9:09 AM