Promote the opening of a brand new grocery store in Drammen, Norway's 6th biggest city. Make sure that the people of Drammen talks about Ultra. After the client approved the stunt, 5 meter tall letterswere constucted using industrial isopor. These letters were carefully installed on a 17 meter long barge. Strong light spots and a diesel aggregate made sure that the letters were lit up at night. The barge was sailed up and down the Drammen river, wich divedes the city center in two, at peak hours. On the evening of the opening a big pyro show emerged from the barge, lighting up the night sky of Drammen. At no time during the campaign week, the stunt was explained or adressed from Ultra's side. The convention in Norway when it comes to advertising a grocery store opening, is the countdown in the newspaper. 5 days left! 4 days left! Drammen is full of big grocery stores, competition is hard. Ultra wanted to make sure - 1. that not one single person in Drammen was unaware of its opening and - 2. position Ultra as different and more sophisticated. Therefore an unconventional promotion idea was needed. The people of Drammen love their river, it was never before been used as media. Ultra was quite confident that this promo would gain the necessary word of mouth value. 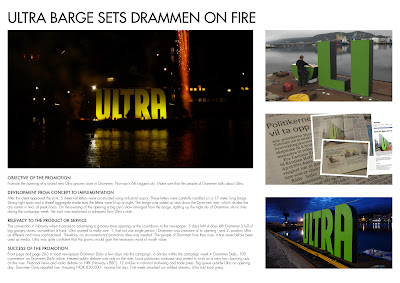 Posted by Marc van Wageningen at 11:39 AM