They inserted this magazine innovation in a national weekly. In its folded form, the reader saw one part of the message wich was, "When one person donates his eyes..." and a visual of a normal man. But as the reader pulled the fold away, the visual showed images of two blind men with eyesight restored in one eye each. And the full message, "When one person donates his eyes, two blind people can see." This was a relatively unknown fact which was brought to light with this simple innovation. And as a result eyebanks across the country showed a sudden spurge in the number of willing donors. 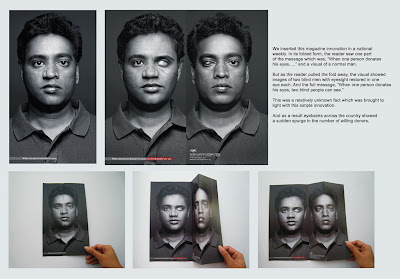 Posted by Marc van Wageningen at 8:27 AM