Child labour is a grave problem that threatens the future of our nation. Today underage labour deprives thousands of children in India of an education and these children are forced to work in hazardous and unhygienic work environments. To free them from the clutches of child labour is a challenge that they as citizens must take up. Each individual's contribution cn help after current situation; this was the essential message to be communicated in the ambient space. A life-sized statue of a child, dressed in rags carrying a box above his head was sculpted and placed against a wall backdrop. The box filled with some weights was tied to a rope running over a set of pulleys and attached to a donation box at the other end. The words, "Your contribution can end child labour" was painted over it. This installation was placed in several malls with high volume footballs across the city. The response received was overwhelming. As people contributed to the cause by donating over half a million rupees (and counting...), its gradually increasing weight resulted in the box on the child's head to rise. People were held speechless, moved by the interactive imagery of this piece and driven to be a part of the change. 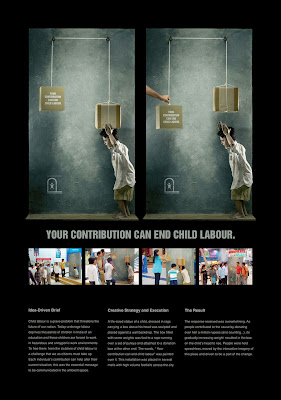