To promote a shock documentary series on day-to-day life in one of America's worst prisons. More than 30.000 place settings depicting a picture of a disgusting prison meal tray were distributed at lunchtime in Paris eateries and brasseries (restaurants). This ambient promotional campaign for the show generated far more attention than the press and poster campaign that was launched concurrently. The outcome? The chain achieved its highest viewing figures since its foundation in 2001. Many articles were written mentioning the operation in the French daily press and in French magazines. 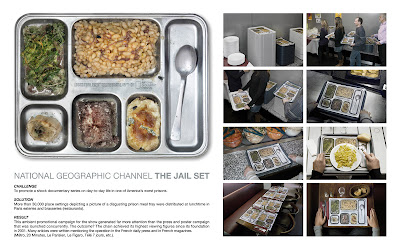