Create a brand campaign for 888.com that tells people what they do. Existing promotion is restricted to football shirt sponsorship, and as a result, consumers are in the dark over what 888.com are all about. It's human nature to see how an outcome evolves. They tapped into this by using the same mechanic that real life casinos use, and turned the world into a virtual casino. Billboards and taxi sides became a version of roulette. Tube cards became a game of chance. Press ads got people to make an educated guess. Online, two games mimicked casino play. One was a form of roulette, as giant pieces of toast were tossed off the top of high rise buildings, with a 'jam side up' or 'marmite side up' outcome. The other game showed a dog chasing four items - a bone, a stick, a ball and a string of sausages, to see who would get caught first. They filmed every possible outcome a number of times, and used the same technology as a casino does to randomise the result, making it a game of pure luck. The campaign really involved it's audience. As well as using more progressive media, they got people to actively engage with traditional media again. This meant the clients budget could be spent in a cost effective way. As a result of their campaign, sign up of members on the site kept reaching record levels month on month. Giving 888.com a massive membership base, contributing to them being voted online casino of the year for 2008. Bronze Direct Lions Winner. 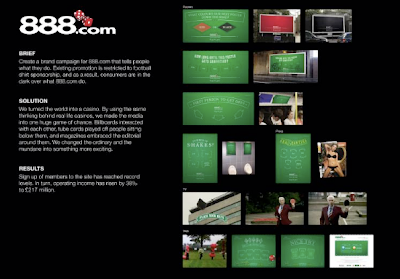 Posted by Marc van Wageningen at 10:24 AM