They wanted to capture the attention of the media to create as much awareness as possible for an initiative of extraordinary human interest. They created a standard press release in which we told the advertising industry that they had new creatives working for us and they invited them to take a look at their latest work. The journalists would then see that all of our 'new creatives' were kids with Down's syndrome. They made it impossible for them not to look at the DVD, where they found out all about the campaign and understood the press release. The response was beautiful. Every single publication covered this unique initiative. But most significantly, all of them called the agency to say how moved they were by this campaign. Gold Promo Lions Winner. 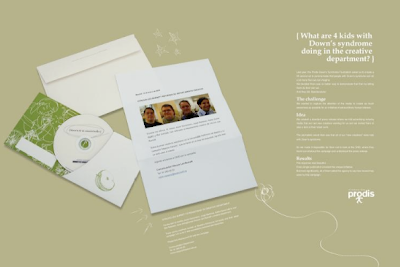 Posted by Marc van Wageningen at 11:11 AM