Unilever/Kibon "Ipod in the popsicle"

Create a promotional action that could replace Kibon's traditional prize in the stick promotion during the most important sales period of the year: the summer. What prize would be even cooler than another popsicle? An iPod. How to award this prize? In place of the popsicle. A replica was made of the popsicle an EVA cradle and a resin mould for the iPod to protect it against the low temperature and moisture. 10,000 iPods were distributed throughout Brazil. Whoever finds one will receive the accessories at home plus a real popsicle. They created a new promotional mechanism, without any complications, without exchange stations and without lines. The consumer won the prize immediately and also received all the iPod accessories and a real popsicle at home. iPod on a Popsicle was a huge success in Brazil. It grabbed free space on the main blogs around the world. Even Gizmodo published 2 posts about it, raising the attention for the brand/promotion. Blogs and YouTube videos generated by winners kept the attention during the promotional period and helped to achieve an historical sales increase record. In 3 months, it reached 90,000 points-of-sale and sales volume grew 31% compared to the previous year. 2x Bronze Promo Lions Winner. 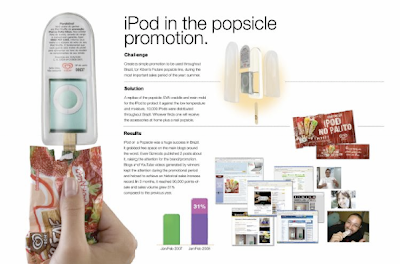 Posted by Marc van Wageningen at 9:14 AM