Halo3 is the third game in the Xbox exclusive Halo franchise. Every Halo launch has been a big event amongst the gamer audience, but the client wanted Halo3 to be more: an entertainment landmark. The Halo 3 'Believe' campaign idea sought to reposition the protagonist of the Halo series as the hero and saviour of mankind. They built a vision of a future world, looking back on the events of the Halo wars, and humanity's victory. Their specific task was to run a promotion in-cinemas, to engage consumers with the content of Halo 3 and build a true cultural connection. The concept was to extend the 'Museum of Humanity' advertising idea, by creating a war photographer, Jake Courage, who had been stationed on the front lines in the Halo wars. They then exhibited a selection of his photos, which show the emotion and power of the story and action in Halo 3, both physically in cinemas across Britain and online. They also shot & ran a short documentary on his life and work, again in cinemas and at www.jakecourage.com. The real competitive advantage for a game in a cinema environment is that it has a deeper and richer story than any film, taking 30 or 40 hours to explore the world of Halo 3. So they felt it appropriate to add character and events to the Halo world by inventing the Jake Courage character for our promotion, a "real" human with a biography featured in the official Halo wiki. In particular, they wanted to reward people coming across our activity with new and interesting content, not a marketing message. And the use of www.jakecourage.com allowed people to do this globally. By repurposing visuals from the TV campaign, the additional client investment in the Jake Courage campaign was minimal, limited to actually building the infrastructure of the campaign. On a total budget of £10,000, they know that they reached XXX people in cinemas, including a few light-fingered fans who stole the photography from the walls. PR across online & offline titles has also helped drive site traffic past 11,000 unique users globally, a figure still growing for a true long tail campaign, with an average dwell time still of over 3 minutes. Gold Promo Lions Winner. 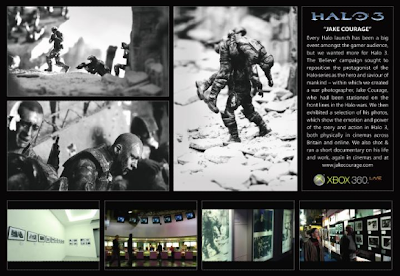 Posted by Marc van Wageningen at 10:00 AM