IPÊ mainly implements environmental consciousness projects among rural residents living close to forests and jungles in Brazil. They were tasked with raising awareness for IPE's anti-deforestation drive among urban residents living in Brazil's larger metropolitan cities, encouraging them to use only certified wood and not wood illegally obtained from Brazil's jungles and forests. For that matter, the promo consisted in creating sticker decals that realistically resembled bird nests with birds living in them. They were then stuck on every wooden door, gate and fence - recreating their natural habitat in an urban environment. Upon closer exploration of the sticker, people would read: "Deforestation destroys the natural habitats of many animal species. Make sure that all the wood you buy is legally certified. IPÊ - Ecological Research Institute - www.ipe.org.br". Since our budget was minimal, typical outdoor messaging was not possible. They had to create an alternative media that would still draw attention to the cause. The decals were stuck specifically in and around retail districts inside the metropolitan cities, well known for selling wooden goods (doors, windows, furniture), helping the message to reach its main target: wood shoppers and retailers. In just 2 weeks following this promotion, IPÊ reached its projection for metropolitan cities in Brazil, having increased its website page-views by over 8%. Bronze Promo Lions Winner. 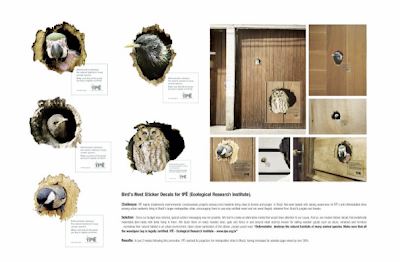