To create a sense of urgency around the extinction of endangered wild birds in Japan (Japanese red-crown crane, stork, albatross and yellow-breasted bunting). They thought the best way to value these wonderful birds was to not just see them but actually be able to hear them. However, to get their beautiful songs in front of a younger target they needed a contemporary and relevant execution. So they went out and actually sampled the bird's songs and mixed them into contemporary dance tracks. The tracks were then pressed into retro vinyl and placed in hip Tokyo record stores. Each endangered bird was given their own album with the quantity equaling the estimated number of that species left. To create awareness with the younger Japanese generation of the many endangered birds species in Japan, we created the "Sounds of endangered wild birds" albums. The music was created by actually sampling the unique bird songs. They then pressed retro vinyl records and put them in the shelves at records shop in the young areas of Shibuya. They placed the same number of albums as the actual number of each bird left in Japan. Although the number released was limited, the idea attracted the attention of local DJs. These artists have been purchasing the album and playing it in clubs throughout Tokyo which has been a successful tool in spreading the extinction message. In addition, the proceeds of the sales are used to further fund the endangered bird project. Gold Promo Lions Winner. 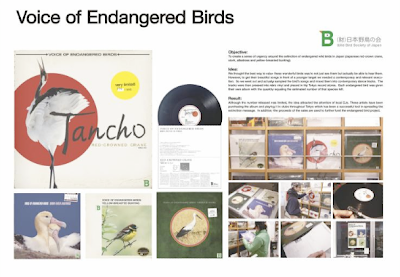 Posted by Marc van Wageningen at 10:51 AM