Heroes is a drama series about ordinary poeple with extraordinary abilities. To create intrigue and hype for it's premiere screening, they wanted to demonstrate one character's amazing ability. The ability to stop time.So they did it in real life with the help of about 60 event participants who were asked to pose completely statue-still, mid action. They also froze over public drinking fountains, as well as drinks poured at cafes. Coins that were dropped for buskers were suspended in mid air, skateboarders were paused on ledges mid grind, a courier was stopped in the middle of toppling over with his dilivery, ect. At the scene pavement signs read, "Someone can stop time. Heroes. 8:30pm tonight. TV3" 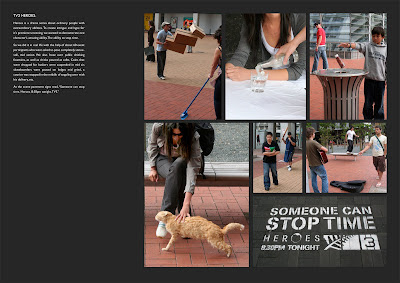 Posted by Marc van Wageningen at 9:50 AM