In order to impact perceptions among an already positive audience, it wouldn't be enough to tell super-fans that they are the leaders at cutting-edge, innovative storytelling - they needed to show them. HBO Voyeur took the act of watching, already an integral part of the HBO experience, and intensified it. The viewers became essential players within the story - their gaze the very essence of the concept for HBO Voyeur: sometimes the best stories are the ones they were not meant to see. It encouraged viewers to seek more, become a part of the story and engage with the content. In order to encourage the participation beyond passive viewing that is so critical to super-fans' experience with the brand, HBO Voyeur was expressed as a multi-media, multi-platform program, each touch-point acting as an invitation to engage with the project as a whole. It began with a life-size projection on the side of an apartment building in downtown Manhattan, creating the illusion that the wall had been cut away and allowing viewers to experience the story by seeing the lives inside. The campaign extended to HBOVoyeur.com, HBO On Demand and HBO Mobile, with each content experience uniquely tailored to its platform. HBO Voyeur strengthened super-fans' perception of the HBO brand: 74% said Voyeur set the HBO brand apart. 72% claimed it made them think HBO is better than other networks. 60% said it made them more interested in the HBO brand. The campaign led to improved feelings towards programming, even though Voyeur was not linked to any specific shows. (Hall and Partners) Additionally: 3,200+ people visited the Manhattan event. Over 1 million users visited HBOvoyeur.com within the first 3 weeks (Google Analytics). The campaign was mentioned in 500+ blogs, prompting conversations and debate (Nielsen BuzzMetrics). 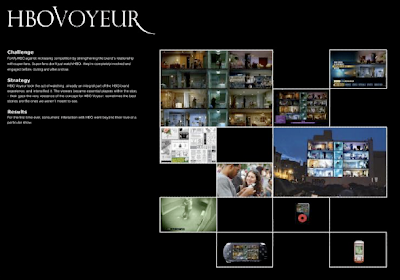 Posted by Marc van Wageningen at 9:35 AM