Peugeot "The car is the star"

In a category where a strong TV presence is deemed essential, their approach was to differentiate Peugeot from the competition, by using TV in a genuinely distinctive way. They developed a long term partnership with leading terrestrial Channel 13 show, Argentines Par Su Nombre, a show characterised by its fast-paced content, in which host Andy Kusnetzoff, travels around Argentina reporting live from different locations throughout the country. With the car such an integral part of the show, we were able to showcase the Peugeot brand in the most dynamic way, effectively positioning it as the 'star' of the show. The car was customised with six interior cameras, effectively becoming the TV set across an eight month period (27 outings in total). This meant that it was the focal point throughout, from the opening sequence to the final frame. Although Kusnetzoff regularly stops en route, the car remains a constant presence throughout; delivering a strong branded presence which they believe could never have been achieved as effectively using traditional TV advertising. Aside from the strong editorial link between the 'on-the-go' style of the show and the car, the show was chosen because it has a huge youth following, with Kusnetzoff particularly known and liked amongst 20-45, higher income consumers, who are the core desired audience for the 206. For the cost of a single 30 second spot, they were present in more than 80% of the show (visually or audio) across the 27 shows. This equates to an on-screen presence one hundred times higher than the equivalent exposure, had they paid for traditional advertising in the break. Bronze Media Lions Winner. 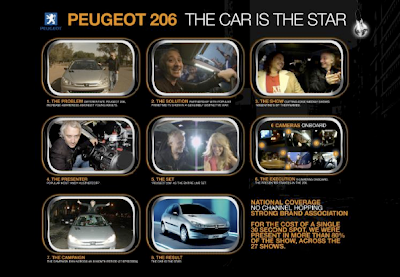 Posted by Marc van Wageningen at 9:12 AM