Develop a promotional idea for a special issue of the Quote 500, the Dutch equivalent of the Forbes 500. This special issue is called the "Quote 500 junior" and lists Holland's youngest multimillionaires. To get those filthy rich kids on the right track, they came up with a little ABC-book. With 26 invaluable and highly educative words to help the kids get the most out of life. This early learning book was sealed in with the magazine. The special issue sold 19% more copies than in previous years. Furthermore it generated loads of free publicity and requests to get extra copies of the ABC-book. That's why the publisher decided to also sell the book in childeren book stores. For only 4,95 euro (=0,00000495 million euro)! Bronze Promo Lion Winner. 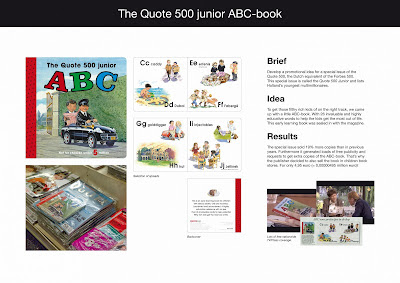 Posted by Marc van Wageningen at 9:27 AM