Consolidate the link between the goal scoring sensation Martin Palermo and Puma, in a setting where Nike has huge budgets and owns the image and sportswear of the team Palermo plays on: Boca Juniors. Spread the fact that Palermo has four goals to go before reaching the mark of 180, and pay tribute to him when he achieves this milestone. One hundred and eighty pairs of special edition cleats were developed, one for each goal, and each one containing an inscription of the facts of the goal it represents. The special edition cleats will be launched the day he scores goal 180. They may only be obtained by registering on losbotinesdepalermo.com. The 180 pairs will be given away by hiding them somewhere within the city of Buenos Aires and on the internet. The authentic pair 180 was donated to UNICEF, and as part of the tribute, the Palermo subway station was adorned as Martin Palermo Station. The main thing was that this campaign was running live. Waiting for the goal 180 created huge expectation for the cleats and the way it would be launched. The cleats had a huge impact, playing an important role in the image of the player and became an icon of the brand. The most prominent newspapers, blogs, radio stations and TV news broadcasts included the campaign as news. The campaign generated a mark valued at US$1,200,000, having invested a mere US$150,000. The Press & Media edited their versions of the 180 goals. 93% of internet site visitors were registered, generating a database of 75000 people. 35.000 took part in the search for the cleats throughout the city. 47% of those registered. Puma developed a new line of products following the campaign. Cleat 180 raised record values at the UNICEF auction. 2x Silver Promo Lions Winner. 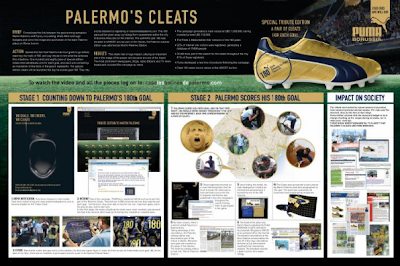