Cervical cancer kills two women everyday in Spain (over 700 per year). It's the most common cancer after breast cancer and almost no one is aware of this. Three months ago, a vaccine was created that can prevent it. This is the first vaccine to prevent cancer and six scientific associations lead by SEGO (Spanish Association of Gynecology and Obstetrics) began an awareness and prevention campaign with the following objectives: - Raise awareness of the seriousness of the illness. - Publicize the existence of the vaccines and promote preventative practices. These vaccines will prevent the deaths of thousands of women. The idea should allow the campaign to transcend in time and LASTS FOREVER so that their daughters and our daughters' daughters can always remember that they were able to beat cervical cancer. A groundbreaking way to honor an important moment in history making this news more viral than the virus itself: Raise an actual monument in a public park and inscribe the names of the first 25,000 people who helped to virally spread the news using the Internet, Online Buzz, Mailings, Ambient Marketing, TV, Print, etc. Many more women are getting vaccinated. According to IMS (Pharmaceutical sector source - imshealth.com), following the campaign, the demand for vaccines preventing cervical cancer increased by 556%. 470,605 women reached by viral email (9 times the objective!) Post-Test Nielsen (Available to jury): 60% remember the campaign 47% of those who remember the campaign intend on getting the vaccine (35% more than those who don't remember). 67% of mothers say they'll take their daughters in to get the vaccine after the campaign. Silver & 2x Bronze Direct Lions Winner. 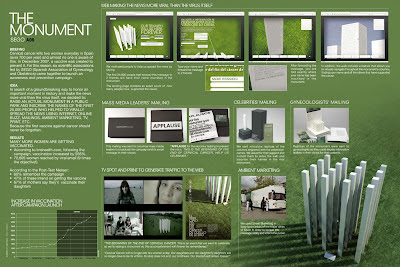