The task was to promote Tricom's High Bandwidth Internet Service, to do this they took a couple of things into consideration. For Dominicans there are very few things more important than baseball. The game is sacred and that night the two most important national teams were playing: The Licey Tigers and the Cibao Eagles. When a Dominican doesn't go to the stadium, he follows the game either on TV, through the radio or over the Internet. That's why the stadium became the perfect place to promote Tricom's High Bandwidth. With 30 thousand spectators in the arena and more than a million people at home watching the game they decided to create a live action on the field that simulated the experience of surfing the web on a slow connection. Prior to the game they rehearsed with the players so that, upon a signal only they saw, they would freeze in a specific moment of the game, go back to playing normally and freeze again. After repeating this a couple of times a person would come out with a sign that read "Live it without the wait with Tricom's High Bandwidth". They wanted to show everyone what it was like to watch the game through an Internet connection that wasn't Tricom. The Internet Service Provider experienced a 23% growth in new subscriptions. Some bloggers published the video in their blogs and it became a viral under the title "The Quisqueya Stadium freezes up". It was also commented the next day in the newspapers, radio and sport tv shows. Gold Promo Lions Winner. 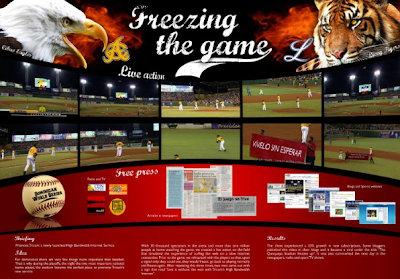 Posted by Marc van Wageningen at 10:34 AM