Background information: Amstel Beer has a loyalty programm for football fans in which members can join lotteries and auctions to obtain free tickets for national and international football matches. Goal: Let die-hard football fans know that Amstel Beer continues to give away free football tickets to members of its' loyalty programm. Because Amstel is a sponsor of the Dutch Premier League they could do things that normally would be out of the question. So instead of using expensive ads or commercials they used the stadium announcers of Ajax and Feyenoord in front of crowds of 50.000 for our message. Just using them in a normal way would be boring. But by letting them talk repeatedly to a fan whose wife was supposedly in hospital giving birth, made it memorable. 100.000 fans (in total) were thrilled about that fan who preferred to stay at the match instead of supporting his wife in hospital. The Amstel loyalty programm is for 100% aiming at beer drinking football fans. Main feature of the loyalty programm is the big amount of free football tickets you can obtain. THE place where they can find their target audience is in football stadiums. And THE way of getting their attention is to do something extraordinary that appeals to the entire crowd at the same time. This method was most relevant because with this idea they could communicate to real fans that Amstel understands the really fanatic fans. Fans that want to see every second of every important match. You only need to see and hear the laughter of a crowd of 50.000 to know this message reached not only their heads but also their hearts. They managed to pull this trick twice so we effectively reached 100.000 fans. Costs for this approach were practically zero. With only 2 matches we reached 100.000 men from our target audience. Since this stunt 10.000 new members joined the Amstel 'free tickets'-programme. Not to forget the impact this ad made on 100.000 people, contributing to brand likability. Bronze Promo Lion Winner. 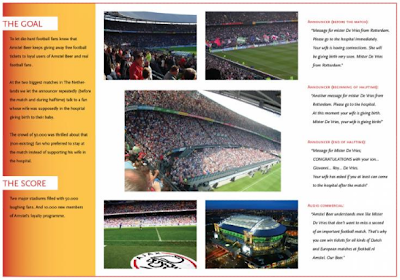