The brief was to launch a new performance enhancing bread across Australia. The product: new Wonder Performance is a unique combination of complex carbs and iron for energy, as well as protein and amino acids for strength that gives teenagers the fuel to perform. Their objective was to appeal to the diverse audience of mums and teenage boys within a short period of time. Their solution stemmed from the fact that Wonder had had a 'proven' track record of transformational powers. We seeded the internet with three different unbranded mpegs of ducks that had unique powers: duck surfing, formation flying and escalator ducks. A unique website and phone number was set up to report on these 'duck phenomena'. A TVC then broke the news that the ducks were performing this way because they shouldn't be fed new Wonder Performance bread: it was good for teenagers but not for ducks. This news was posted on the website and in eDM to those who had registered. The launch of the three mpegs went viral in the true sense of the word. To date there have been over 2.7 million views on YouTube, over half a million listings for 'surfing duck' on Google. The phenomenon was featured on the New York Times, Sky News and Daily Telegraph websites to name a few. Over 10,000 people have registered for a duck repellent ring tone or filed a duck report. In the first week of launch New Wonder Performance sold over A$1,000,000 worth of bread. Gold Direct Lions Winner. 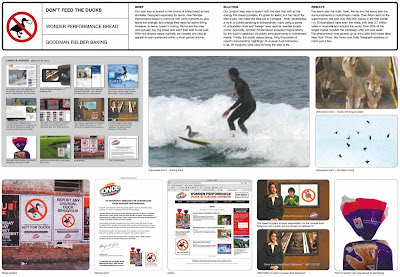