The IKEA catalogue is, next to the Bible and Harry Potter, the third most printed publication worldwide. Their objective was to advertise the new IKEA catalogue with an innovative consumer event that involves a lot of people and boosts IKEA's brand appeal. The consumer event should work with the motto "Fashion for your most beautiful home in the world." This was the motto of the annual IKEA campaign in Germany for 2007. They transformed the two-dimensional IKEA catalogue cover into a three-dimensional installation by creating an exact replica of the living room on the catalogue cover. Their 3-D Cover went on tour throughout shopping malls in 24 German cities. Everyone had the opportunity to have their picture taken on their catalogue cover set. A few days later, participants in the photo shoot could go to IKEA and pick up a catalogue featuring themselves as the cover model! In this way, they made a lot of people a part of the new IKEA catalogue. A total of 7,120 people had their pictures taken and 4,039 of them picked up their personalized catalogue at IKEA. That's more than 56%! The consumer event not only boosted IKEA's image, but also increased traffic and sales in IKEA furniture stores! Silver Direct Lions & Silver Promo Lions Winner. 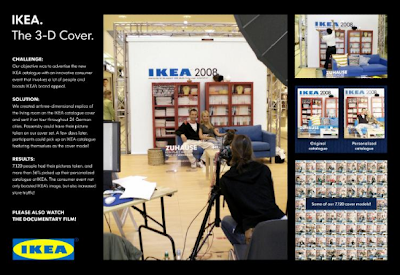