Since the beginning of 2008, a new law gives the German federal government broad access to stored telephone and Internet data - including e-mail addresses, length of call and numbers dialled - for a six month period. The private initative "Arbeitskreis Vorratsdatenspeicherung" called for a class suit against the new law. But how can you promote something as abstract as secret data retention? Through widespread discussions in the press, most users don't realise what kind of data and to which extent they leave behind when surfing the Web. A special programme visualises the digital fingerprint of every user. The fingerprints lead the user to a landing page and to a special browser for anonymous Web surfing. Most Internet users are not aware to what extent their surfing habits are traceable. At the same time, the Web is the perfect place for appealing to new members for an existing movement. Being launched just in 2008, the "Fingerprint" project may be able to fuel the discussion about privacy in the Internet and raise awareness for the issue. The sheer number of 30,000 participants that joined the class suit of the Initiative at the German Constitutional Court clearly demonstrates the public interest. Gold & Silver Promo & Bronze Direct Lions Winner. 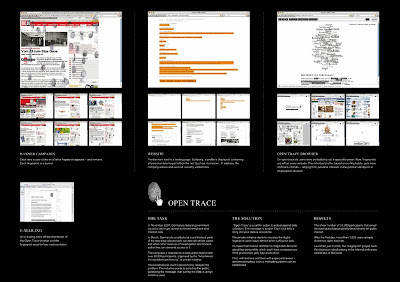