To get the most talented DTPer (studio designer) in a highly competitive market where it’s hard to stand out among all the job vacancy ads in this sector. To execute the idea for the same price as a normal ad, but then with a lot of free publicity. This creative execution was relevant because DTPers were waiting for the authentic ADOBE CS4 software which was about to be launched. DTPers are working with this software, and therefore this Trojan horse attracted their attention immediately. The design had to look as real as possible. The Box had to look real, but at a second glance it would make you smile. Also the special made programme had to make the DTPer smile. Infiltrate in companies by delivering a box to the desk of targeted DTPers. The box looked like the new ADOBE CS4 software, but it was a Trojan horse called ABODE CS4, meaning Ad for most Brilliant and Outstanding DTPer Ever. A special courier delivered the packages. Each package contained a DVD and guidebook. The DVD describes the Marketing Agency 2008 and the current vacancy. It includes a software programme they designed so that people could create their own personal letter of application. With one click they could send this letter to 2008. They also designed a special website www.abodecs4.com. The response of this campaign was overwhelming. They delivered 70 boxes, but received over a 100 applications. The news of their action was spreading everywhere, from their own website www.abodecs4.com to blogs, advertising magazines, computer magazines and even job magazines. They did 20 job interviews and finally they got the guy who was perfect for the job. The box became a product that every DTPer wanted to have. The costs were less than a 1/2 traditional ad in a trade paper (5000 Euro). They got their DTPer and a lot of free publicity for the new company. Bronze Cannes Lions Direct Winner" 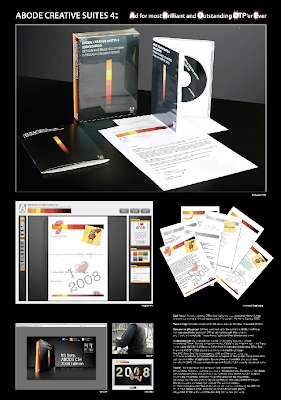