The objective was to develop a campaign to talk to young people about the dangers of skin cancer, what causes it and how it can be prevented. This is a category usually very sceptical of traditional health or charity advertising, and that wouldn’t normally be reached through conventional media. To drive traffic to the site, they developed an infomercial offering free online tanning sessions at computertan.com. This was sent out as an email to over 10,000 address. This was seeded across the web as well as key bloggers together with an extensive national PR campaign. 25,000 flyers offering free tanning sessions were distributed and the film was displayed on 50 digital cross track panels in 10 London Underground stations and on 1000 London black taxi screens. Online banners were positioned on 250 key websites receiving over 17million page impressions. In a second wave of activity, an iPhone application was launched and sent out to our email database with further supporting online advertising. The site attracted over 402,000 visitors from 190 countries, registering over 1.5million page views, with an average dwell time of 2 minutes 15 seconds. Since its launch, 262 blog posts have been logged. 7million people were exposed to CBS digital cross tracks, 700,000 more through London Cab vision and they achieved over 17 million page impressions from online banners. Their PR campaign delivered national coverage in The Sun, The Independent, The Daily Express, The Guardian, on BBC News and on BBC Radio One. International coverage included 66 specialist stories varying from The New Zealand Herald, Fox US and Yahoo News. Their core audience of 16-30yr olds are traditionally unresponsive to health-focused/charity messages. They needed to bypass their natural cynicism to get the charity’s message across. 2x Bronze Cannes Lions Promo Winner. 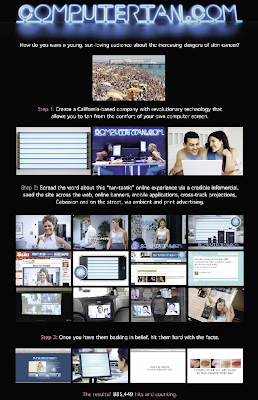