The campaign tries to raise awareness between the citizens regarding the importance of civic behavior. Currently the Town Hall’s expense to replace city furniture as a consequence of vandalism is one of the highest in Europe. This is why, it was essential to face the matter directly, making public the amount of unnecessary money spent for this matter. Target group: Since it is a campaign to raise social awareness the target group is all citizens of Navarra. Innovation: The concept that has been used is "Taking care of your city costs you nothing, Pamplona pays 1.5 million euros." The action involved hanging tags with prices on all those elements that belong to the Town Hall and that are susceptible to generate a cost due to their incorrect use. They have used a wide range of magenta tags, different in size and content. There were small tags, almost 15cm (for dog excrements) up to huge tags of more than 3 meters (for emblematic monuments). The reverse side of the tag explains the action: Example: The Town Hall of Pamplona invests 200,000 Euros each year to repair banks. “Taking care of your city has no cost for you, Pamplona pays 1.5 million Euros”. The effect obtained has been shocking and innovative. Citizens have become conscious of the great expense that vandalism acts mean. This campaign is an innovation given the spectacle and impact of the action. The whole city woke up coloured with magenta tags that made the amounts spent a real problem. The action recieved great notoriety and national media repercussion (TVE, Tele 5 TV, the Spanish leading television, Diario 20 minutos, …), locally (Canal 4 TV, Canal 6, Canal Sur TV, Diario de Navarra, Diario de Noticias, AND…), online news (20 Minutos, Atlas-news, Yahoo news…) as well as between all citizens. Bronze Cannes Lions Media Winner. 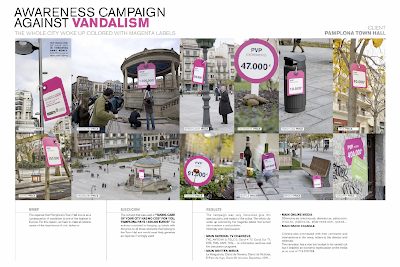